A randomized-controlled study concluded the combination of ossein hydroxyapatite (“OHC”, generic Bone Support®) and HRT increased vertebral bone mass in postmenopausal women to a greater extent (4.7%, P&lt;.01) than did HRT alone.1Another randomized-controlled study divided 60 postmenopausal women not on HRT into three groups. One group did not receive any treatment, one received calcium carbonate (CC) and the third received OHC. Subjects on OHC therapy did not show significant changes from baseline bone density; density decreased significantly in the CC group during the second year and decreased in the control group at the first and second bone mineral density measurement.2 Yet another double- blind study showed OHC is more effective than CC in slowing peripheral trabecular bone loss in patients with manifest osteoporosis.6 The bioavailability of calcium in ossein-mineral complex was also proven to be as good as, if not better than, that of Ca-gluconate.3 Two randomized clinical trials demonstrated Bone Support® is well-tolerated and prevents the onset or progression of osteoporosis in patients treated with corticosteroids.4,5Only two subjects out of 19 subjects who reported back pain at the beginning of a study still had any complaint after the 12-month trial on Bone Support®.4 Unlike other calcium supplements on the market, Bone Support™ consists of collagenous and non-collagenous proteins/peptides that contain insulin-like growth factor I (IGF-I), insulin-like growth factor II (IGF-II), transforming growth factor beta (TGF-beta) and osteocalcin. These factors stimulate the activity of alkaline phosphatase in human bone cells.6 Calcium absorption in the intestines is stimulated by vitamin D, likely deficient in the American diet/ lifestyle.7 The normal aging process in combination with a Vitamin D insufficiency may lead to secondary hyperparathyroidism in the elderly, a condition that facilitates bone loss. Bone Support™ contains vitamin D3, a pre-formed source of vitamin D activity. Dietary magnesium deficiency has been linked to osteoporosis. Bone Support™ contains magnesium in a 2:1 ratio with calcium. The malates do not react with stomach acid and are less likely than carbonates to cause gas and acid rebound. 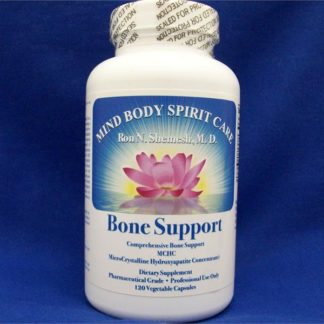