View cart “Detox Support” has been added to your cart.

The benefits of niacin, vitamin B3 were introduced in the June, 1956 issue of Mayo Clinic Proceedings.1 More than 20 years later the Framingham Heart Study indicated niacin reduced triglycerides and LDL, and increased HDL. Ten years later, the Framingham Heart Study labeled niacin, “Front Line” treatment.2 In 1988, just one year later, the NCEP designated niacin, “First Line Therapy” in the treatment of hyperlipidemias. There are several theories behind niacin’s mode of action. 1) It inhibits the formation of VLDL in the liver. VLDL is converted to LDL and triglycerides. 2) Niacin reduces the non-esterified or free fatty acids and triglycerides by inhibiting the breakdown of fat in tissues. 3) Last, niacin stimulates bile flow (and when used with resins) may suppress cholesterol synthesis. It does not change the composition of the bile. From the late 1970’s through the turn of the century dozens of clinical trials have taken place at leading universities and institutions. Some trials compared niacin to other lipid management therapies such as resins, fibrates, or neomycin. Others studied the vitamin in combination with statin drugs or as solo treatments. The individual study periods were from 4 weeks up to 5 years duration. Study after study consistently demonstrated that niacin decreases triglycerides and LDL, and increases HDL. Niacin is the only therapy that consistently improves the entire lipid profile; and the only treatment to lower Lp(a).5,6 So, why is niacin not used more widely? The two common concerns are (harmless) cutaneous flushing that may last from 10-15 minutes (rarely, but possibly up to 2 hours); and increases in liver enzymes; signaling potential hepatotoxicity. The first concern can be dramatically reduced with sustained–released niacin such as Niacin SR™. The second concern came about as the result of McKenney’s study published in 1994 in the JAMA in which subjects, regardless of the decline in their lipids with lower doses, continued to receive up to 3000 mg/day of niacin.7 McKenney retracted his earlier warnings about the harmful effects of niacin in April, 2004 and publicly supported its unique benefits.8 Special Considerations &amp; Potential Side-Effects Liver enzymes may increase when initiating niacin therapy, especially in amounts greater than 1000 mg/day. Therefore, enzymes should be monitored by a knowledgeable health care practitioner. The levels generally do not enter an unhealthy range. It is prudent to perform a liver profile every 2-3 months for the first year; then annually if levels have been healthy. Enzyme levels return to normal promptly after cessation of niacin.9,13 Uric acid levels, especially in patients with a history of gout should also be monitored. The combination of Niacin SR™ with aspirin increases the likelihood of hyperuricemia. Uric acid levels can be managed with folic acid such as found in Mind Body Spirit Care®’s Methyl Protect™ and/or supplementing with a minimum of 500 mg/day of vitamin C (e.g. Mind Body Spirit Care®’s Xcellent C™ or Bio C 1:1™) 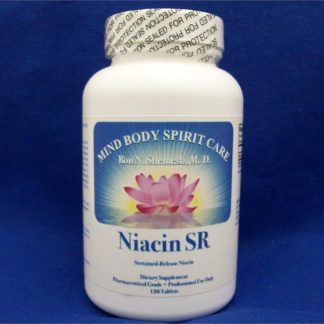